My clients love the fantastic location, walking distance to all the trendy restaurants and bars in Oakley, Hyde Park and Rookwood! Beautiful gaslight and tree-lined area with wide streets and sidewalks on both sides!

The village of Oakley, a name referring to the many oak trees in the area, was officially registered with the Hamilton County Courthouse in 1869 and the village was incorporated in 1898. Oakley was once the home of the famed markswoman Annie Oakley, who made her public debut in 1876.

Oakley was annexed to the city of Cincinnati in 1913.[3] In the same year, Aglamesis Bro's Ice Cream Parlor and Candy Shoppe opened to accommodate the growing population of workers at the Mill, as the Cincinnati Milling Machine Company was called.

The Geier Esplanade, commonly known as Oakley Square, was created when two parcels of land were acquired in 1927 and 1932 and were converted into green space. It is situated in the heart of Oakley on Madison Road and, through the generosity of the Geier family, flowers and bulbs are planted each year to beautify this small parcel of land in memory of Mr. Fred Geier and Mr. Philip O. Geier, Sr.

The Twentieth Century Theatre was built in 1941 and is a distinctive Oakley landmark with its 72-foot tower rising over the business district. The deteriorating theater was slated for demolition in the early 1990s, but was spared due to its historical significance and is finding a new life as a concert and special events venue.

Formerly known as "Final Fridays", Oakley After Hours is a monthly street festival held from 6-10PM on the second Friday of each month May through October. Oakley stores and restaurants keep their doors open for extended hours and offer sales, dining and drink specials, live music, and fun in the neighborhood. The event is sponsored each year by local businesses and is coordinated with the support of the Oakley Community Council. 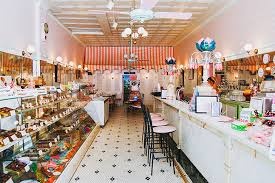 Find a Home in Oakley

See All Neighborhoods
Courtesy of the MLS of Greater Cincinnati. Information deemed reliable but not guaranteed. Information is provided exclusively for consumers' personal, non-commercial use and may not be used for any purpose other than to identify prospective properties the consumer may be interested in purchasing. This data is up-to-date as of Sep 26, 2021 12:58:pm. The data relating to real estate for sale on this web site comes in part from the Broker Reciprocity program of the Multiple Listing Service of Greater Cincinnati. Real estate listings held by brokerage firms other than the owner of this page are marked with the Broker Reciprocity logo and detailed information about them includes the name of the listing brokers Copyright © 2021, MLS of Greater Cincinnati, Inc. All rights reserved.